Whether you’re a veteran paranormal investigator or a gamer-at heart, you’ll love a new PC game called Phasmophobia. Luckily, we are both of those things. I’d describe the game as the closest you can get to a real paranormal investigation – with a sprinkling of creepy chills and a few jump scares thrown in. The biggest asset in the game is the equipment. It’s pretty close to what we would use on IRL ghost hunts, albeit a little dated.

As a veteran investigator who plays this game, I’m frequently asked in-game if this stuff is real. Indeed, it is! And here’s where you can get it, if you are looking to transition from ghost hunting through a monitor to an actual investigation. Happy hunting, investigators! 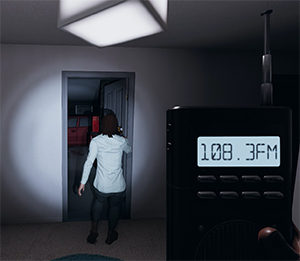 In Phasmophobia, this piece of equipment is used to ask the ghost questions to acquire more information about it. The player/investigator asks questions and (if you’re lucky) the ghost will respond in an electronic voice. This device is known as a ‘Spirit Box’ or ‘Ghost Box’ amongst investigators. The visual model shown in the game is based off of the traditional SB7. However, SBox ghost scanner is a more recent entry into the ghost hunters’ arsenal.

In Phasmo, taking photos at just the right time may provide evidence of its presence. Just point and shoot. Generally, any still camera with a blinding flash will do the trick if that’s your goal. However, there are some awesome night vision and full spectrum cameras out there that will get the shot in total darkness – without blinding your teammates. The visual model shown in the game is based off of a standard point-and-shoot-with-blinding-flash camera. But you should checkout a full spectrum camera  that allows for shots in the dark.

An EMF meter is a staple device in real life (IRL) ghost hunting. EMF stands for ‘electro-magnetic frequencies’ which detects changes in energy. Theories suggest that if a ghost has the ability to change energy an EMF meter may be able to detect the spike. The model shown in the game is a traditional KII Meter (known as K2) has been around for ages. The Rook EMF Meter  is a newer advancement in EMF detection. There are some other advanced versions that display a digital readout along with various other helpful features.

A video camera is a great way to document the events of an investigation. It’s also the only way to catch orbs, which is one of the forms of evidence for identification in-game. The video camera in Phasmo looks to be modeled after a standard DSLR camera with night vision capability. While this isn’t generally standard issue on that type of camera, there are some great night vision and full spectrum cameras out there that are more portable and easier to  use for IRL ghost hunting. When we say full spectrum, consider this ‘night vision PLUS’. The term night vision generally refers to a camera that can see invisible infrared (IR) light. Full Spectrum refers to a cam that sees a bit more including IR, ultraviolet (UV) and visible light. It’s a much better option for low-light investigations.

Flashlights are a staple tool for ghost hunting for a few reasons. Firstly, it serves as a safety device during low light investigations. Some flashlight types can also be used for what some refer to as the ‘flashlight experiment’. This is when you ask questions of the entity and await for the light to flicker in response. In this sense, Phasmophobia took something we do on real investigations and turned it into a pinnacle element of the game. Except, in the game, when you see the flashlight flicking, HIDE! Because it means the ghost is hunting for a victim. In a real investigation setting this experiment can be done by loosening the connection to the battery just enough that it could engage and disengage with light movement. For this, you want a flashlight that has the ability to unscrew easily without coming apart. 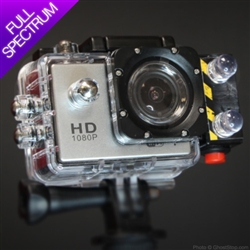 Within Phasmo, the Head Mounted Camera is a night vision video camera that can be used to help track down team members and log Ghost Orbs. You can get a cam just like this with full spectrum night vision capability. Also, using the built-in wifi capability you can use a phone or tablet app to watch a live video feed from the camera. So, similar to what you see in the game, you can monitor what your teammate is doing in glorious night vision and sound.

There are a few types of motion sensors within the game. One referred to as a Motion Sensor and the other an Infrared Light Sensor. In the game both are rather similar with slight differences in what they capture. But the idea is that they both detect movement. There is a wide variety of motion sensors used by paranormal investigators. A simple motion sensor with a PIR sensor detections motion within a cone in front of it. There is a 360 motion sensor that detects motion all around the device, in 360 degrees. There is one called the Flux Response Device which only detects in 2 zones in order to allow an entity to communicate by manipulating one side or the other in response to yes/no questions. There are even some that detect vibration which are helpful in cases where footsteps have been reported. The most advanced, GS2 Laser Grid combines an array of sensors and lasers to acquire all kinds of data about whatever moved in front of it. It’s super cool. Plus… friggin’ lasers!

A parabolic microphone is used to enhance audio coming from a single direction (omni-directional). One might use this to scan an area to determine exactly where a sound or voices is coming from. While this is helpful in game, this is a little counter-productive during real investigations. One of the main goals of ghost hunting is to listen out for every sound and document everything you can for fact-gathering. Since a parabolic focuses solely in one direction, you could be missing something happening in other areas. There are plenty of audio Recorders for ghost hunting that are have phenomenally high sensitivity to capture even the slightest sound, from across a large building. It’s amazing what some of these new recorders can hear. In the ghost hunting world, these are usually referred to as an EVP Recorder which stands for ‘electronic voice phenomena.’ This is based on a theory that an entity can imprint their voice or other sounds on a recorder which you cannot hear with limitations of the human ear. There’s even one you can wear on your wrist like a smart watch.

In Phasmophobia, throughout the investigation you will lose sanity as you progress. Consider it like a standard game health bar. To counter this you can chill out in the van or take a ‘Sanity Pill’ which looks like a prescription bottle. While I don’t condone taking uppers on an investigation, I do recommend coffee. Coffee is the lifeblood and standard issue for ghost hunters. 🙂

Smudge Sticks are used in Phasmo to deter the ghost from hunting you and your team. Many times there is also an objective to smudge the location. Smudging is a real-to-life process used by some in the paranormal field who lean more on the metaphysical side. This is a process theories suggest may help clear the building of some of the more sinister entities. In some cases a client may request their house be cleansed properly. There are many variations of smudge sticks and other cleansing tools you can buy if you are so inclined. 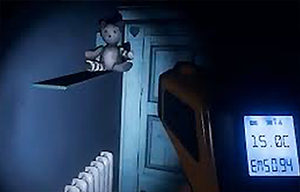 I’m sure you familiar with a thermometers, used to detect changes in temperature. The model used in Phasmophobia is based on a ranged digital thermometer which detects surface temperature. Many confuse this to think the thermometer is detecting area around the device. But it’s actually detecting the temperature of whatever solid surface it is pointing at. It shoots out an invisible laser and displays the temperature of the surface that laser is touching. So, if you’re standing at one end of a room pointing at a window at the other end of the room, the readout is the temperature of the window, not where you are standing. This is how it works in real life much as it does in the game. While both types are helpful in their own way, real life paranormal investigators prefer to use ambient thermometers which detect air temperature around the device. This allows for determining cold spots within the space around you or the probe rather than surface temperature. There are a number of helpful ambient thermometers and many standard ghost hunting tools also have built-in temperature detection as a bonus feature.

Tripods are super helpful in setting up equipment during a ghost hunt. Most paranormal investigators have a nice collection of them. A small flexible tripod is great because they are easy to carry around and are highly versatile. You can bend the legs to wrap around a door handle or hang a camera from a closet door. They’re not just for cameras. Many good paranormal devices will have a tripod mount on them including emf meters, recorders and lasers.

Capturing ghost writing in Phasmophobia is great evidence. If you can capture this in real life while a video camera is running… you have won ghost hunting.

In the game, Phasmophobia, one of the core pieces of evidence to determine a ghost is fingerprints (or handprints). To do this you need a UV flashlight to scan the location walls, windows and light switches. I wish real ghosts would leave finger prints. That would be super helpful. 🙂

Candles in Phasmo are helpful in both providing light and help keep your sanity from dropping nearly as much. In real life they act much the same, even in helping improve your mental stability and focus. Some who lean more toward metaphysical beliefs also highly suggest various candles to provide an array or helpful energies.

Like in the game, a crucifix can be a benefit to those who lean toward belief in their power over dark entities. Many investigators might keep a cross or a representation of a crucifix on them somewhere.

Like the candle and lighter, a glow stick provides a low form of light. Once ignited, they will not dissipate or turn off like a lighter, flashlight or candle. In the game, I like to use these to mark an area we’re focusing on or track my path. Sometimes our real investigations take us to some historic or abandoned old buildings with hazardous obstacles. Glow sticks are helpful in lighting paths – especially those with dangers like a wobbly floor board, holes or wonky stair. This is especially important when we have large groups investigating or taking a tour.

You know what they do and can likely find one at any store near you.

In game, salt is used to track ghost footsteps and help suppress hunting. Some investigators will use this in areas to track movement. Though, I don’t suggest doing this on a residential investigation, it could be a helpful tool if you actually capture an imprint. The client might get a little mad unless you do a good job cleaning up. 🙂