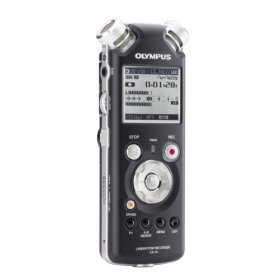 An EVP recorder is really nothing more than a standard audio recorder (digital or analog) that is used in the course of a Paranormal investigation to capture an Electronic voice phenomena.

You can use pretty much anything that will capture audio for EVP recording, you are limited only by your budget and your technical knowledge.

By far the most popular recording device in use by Ghost Hunters today is the Digital voice recorder. They are cheap, simple to operate, easy to carry and store hours or audio on a single card – and you can buy one at any office supply store, or Radio Shack.

Also, most digital voice recorders have a USB port that allows you to download your audio files directly to a computer for analysis.

If you can afford it, you can buy several and leave them in various locations around your investigation area.

An external microphone is highly recommended as the mics built into many handheld units are not able to capture as wide a range of frequencies.

In residual hauntings an EVP may be easy to get. In an interactive haunting that may involve a malevolent spirit or poltergeist you may need to provoke the spirit to get and EVP.  This may include asking for proof that they are actually there to suggesting that they do not exist to going as far as a little name calling to provoke the spirit. Use your imagination to provoking an EVP.

Once you have your digital voice recording file downloaded to your computer you can analyze the EVP with Audacity.  Audacity is free software that works with PC’s or Macs and is a great way to analyze your EVP recording.  It can filter out background noise and help you better analyze your EVP’s, its free and the options it has it too many to list here. Just visit the site.

What is an EVP?

Electronic Voice Phenomenon are recordings of voice, or what appears to be a human voice, on an audiotape or other electronic recording device for which there isn’t any known physical explanation. The film, “White Noise,” depicted this phenomenon and raised awareness of the issue among the general public.

Many paranormal researchers believe the recordings represent legitimate, hard evidence of paranormal activity, but the validity of EVP remains controversial to most of the general public.

Skeptics often argue that the sounds heard on the recordings are in fact not voices at all, but distortions caused by magnetic interference, other electronic devices, equipment malfunctions, or inexperienced users.

Others argue that, although the sounds are voices, the voices are merely wash-over from television and radio broadcasts, CB radio transmissions, and similar broadcasts.