You’re sitting in the back of the car as a child on a family road trip, you’re looking out the window looking up at the sky and you notice the clouds look like a dragon or an elephant.  Obviously you know its not, but it looks cool and you point it out to other passengers, some say it looks like a rabbit either way you all know there isn’t some giant animal floating around in the sky.  This is paradilia, your brain making sense of nonsense. 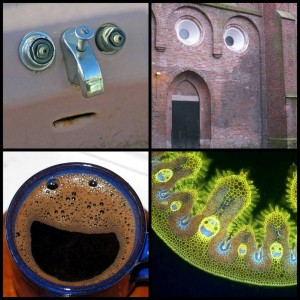 From the moment you could open your eyes, you’ve been training your brain to identify faces. This is something found throughout the animal kingdom.  Eyes, nose and mouth, its something we all see and can immediately identify.   Which is why we see this particular formation in every day objects, most of the time its just a bit of fun be it the front of the car or the way the faucet looks on your bath tub.  It doesn’t mean that your car has a face, or your bath tub will engage in conversation with you its just that’s what we’ve taught our brains to see things.

Now the same goes for dust particles and moisture that we photograph, commonly known as Orbs.  An Orb is defined in the dictionary as a globe or sphere so yes, so far your Orb photo is accurate.  There is a photo of what appears to be globes or spheres.  However the minute you try to explain how this is spirit activity is the minute you lose me.  There is nothing, and Ill say it again just incase you missed it, there is NOTHING paranormal about photos of dust, moisture, lint, bugs or a million and one other airbourne contaminants.  Your house is clean you say, it couldn’t possibly be dust.  Then why is it when that ray of sunlight is passing through your window  you see the movement of dust and lint that’s the same stuff your photographing and calling a ghost.  Doesn’t look much like a ghost when staring at it moving about in the sunlight does it.  But wait, this one has a face…. Nope, no it doesn’t.  What you see there is pixilation, your camera is trying to make sense of what its just taken a photo of the problem is the dust was so close to the lens that its blurred, out of focus and in motion so your camera is doing the best it can and trying to produce the best image it can.  Facial recognition is something a lot of cameras now have installed in to their software, like how the brain identifies two eyes and nose and a mouth, cameras are being designed to do the same thing only they hone in on it, they enhance it and they sharpen the features which is great for your family photo however when your shooting nature and the bark on the tree looks somewhat like a face your camera will pick it out and bring it forward making it a focal point to the photo.   Does this mean that someone’s spirit resides in the tree, that we just took a photo of a ghost.  What about dirt or smudges, even handprints on a window.  Do you think that maybe they could be mistaken for a face?  To many people want to walk away from an investigation with evidence, rather than using common sense or critical thinking they’ll accept the first thing that see and leave it at that.