Capturing the image of a ghost on film is one of the most difficult tasks for even the most experienced ghost hunter, and really good photos that are difficult for skeptics to dismiss are literally once in a lifetime events.

The first challenge to photographing a ghost, and it is a huge challenge, is that in order to catch an image of a ghost, you have to be in the presence of an apparition, and that is in and of itself a monumental challenge.  Visible apparitions are incredibly uncommon. Many serious ghost hunters work for years without ever seeing a confirmed apparition, because they are so random.

However, there are scores of people who’ve captured apparitions on film which are undeniable to most ghost hunters, because the figure on film is clearly human.   These photos are the most difficult for skeptics to criticize.

Unfortunately, for each real ghosting photograph there are fifty fakes, photos which are digitally changed or even staged.  During the actual spiritualist movement of the late 19th and early 20th century numerous fake pictures were created with the “wet glass plate” technique, because the pictures could often generate huge profits for the scammers.

Once this process was exposed every ghost picture was carefully examined and most were rejected as fakes, and today any real ghost photograph or video will generate an enormous skeptical response.

However, but there are a number of well known ghost photos which have been reviewed by experts and are regarded as real by most ghost hunters.  The following is a review of some of the most famous ghost photos. 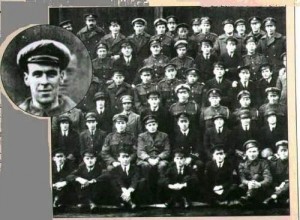 Taken in 1919 by Sir Victor Goddard

A standard group photo of a World War I squadron became infamous when an additional face appeared behind one from the airmen located on the top row, fourth from the left (see insert for a clearer view).

The airmen instantly recognized the face as belonging to Freddy Jackson, a mechanic who was killed by an airplane propeller two days before the photo was taken. Freddy’s funeral had taken place on that day, but apparently Freddy Jackson’s ghost decided to show up anyway. 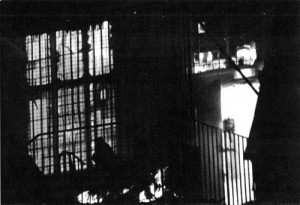 As the Wem Town Hall in Shropshire, England burned to the ground, local residents took photos of the wreckage from across the street.

Tony O’Rahilly utilized a 200mm telephoto lens to snap this photo of a small girl framed in the doorway. None of the other onlookers or fire fighters working the scene remember seeing a little girl, and there would be no reason for her to be in the dangerous shell of the burnt out building.

Dr. Vernon Harrison later examined the photo and it’s negative and determined that it was genuine. Further investigation into the young girl’s identity uncovered records of a child named Jane Churm who passed away in 1677 in northern Shropshire after lighting fire to a thatched roof with a candle. 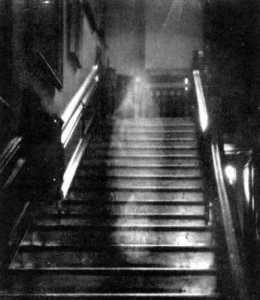 Taken in September 1936 by Captain Provand and Indre Shira

Believed to be the ghost of Lady Dorothy Townshend, this ghost has been haunting the oak staircase of Raynham Hall in Norfolk, England since the 1700s.

Legend has it that Dorothy’s husband, Charles Townshend, believed his wife was having an affair and locked her in a tiny room of the great house until she eventually perished there.

When materialized, she is often seen wearing a brown, satin dress. One report tells of her having hollow sockets where her eyes should be. 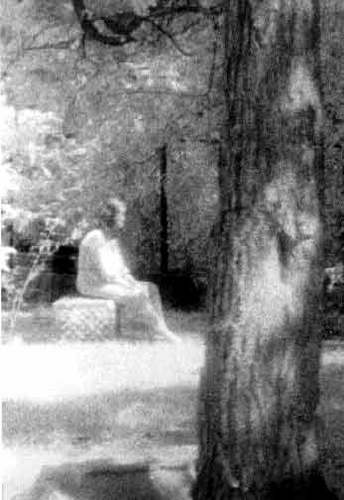 Mari Huff of the “Ghost Research Society” took this photo during an investigation of of Bachelor’s Grove cemetery near Chicago.  The photo was snapped in an area where the group’s equipment had been acting strangely.

The small, abandoned cemetery was empty except for the paranormal investigation team, and yet when the film was developed this image of a  young woman materialized.

Bachelor’s Grove cemetery is considered to be one of  America’s most haunted places, and is known for hundreds of paranormal incidents (including full body apparitions).

5. The Back Seat Ghost

Taken in 1959 by Mabel Chinnery

During a visit to her mother’s grave site, Mabel Chinnery took this candid picture of her husband while he waited patiently in the car.

After Mabel developed the film she noticed the eerie figure in the back seat, just behind her husband’s right shoulder.  Mabel swore that the ghostly aperition was her mother.

An expert examined the photo for signs of fraud and was noted as saying, “I stake my reputation on the fact that the picture is genuine,” adding that the image was not a reflection nor a double exposure.