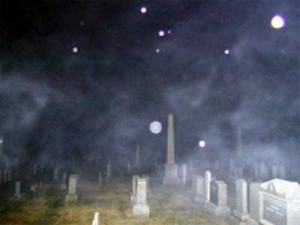 There is a huge debate amongst the skeptics and the paranormal enthusiast. Can orbs be caught on camera or are orbs actually ghosts. There has been proof that orbs that show on pictures can be nothing more than dust, air borne pollen, or bugs.

The invention of the digital camera have really introduced this into the forefront. The flash has been found to have a reaction to dust, air borne pollen and even bugs. When the picture is analyzed they appear on the picture as orbs.

This has cause some real intense skepticism toward orb pictures, so much so, many large based and experience ghost hunting websites have now forbidden the submission of orb pictures. These website are looking for creditability in the paranormal realm, and if they chose to back these types of photos, their creditability is in danger.

I too understand that backing this type of evidence can be extremely hard, because there are now some many know tangibles that are associated when evaluating a orb picture. With this said, there are actual orb pictures out there, but finding and identifying a true orb picture is harder than ever.

Even though orbs are real, it is too tough to actual identify a true orb. Some believe that a true orb is one that gives off it’s own energy, and will show as a large extreme ball of light, not the usual dim version of the dust orbs we come to know.

Some also believe that real orbs will have off color, such as bright orange, or reddish in color. Some believe true orbs will show on pictures with tails or trails attached to them. Some have also have reported of seeing an orb with there own eyes and not with a picture, now this can’t be dust.

All of this leaves the question. How are any paranormal investigator ever going to prove that orbs are paranormal and orbs are real. This is a question I can’t wait to see the answer. I do expect with the current growth of technology, at some point investigators will have some type of photo equipment, aside from night vision camera’s, to give us the proof.

9 thoughts on “Ghost Caught on Camera”