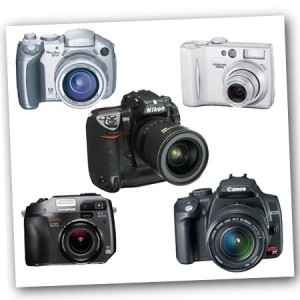 Choosing the right camera to augment your paranormal investigation is a difficult decision, but not nearly as critical as many bloggers and so called ghost hunters suggest.

Today there are a vast range of camera to choose from, and, if used correctly all of them can be useful for a thoughtful ghost hunter.

The key is not what camera you use, but, like with any other tool, how you use it.

Digital Cameras – In the last decade or so digital cameras have really come along way.  Today they take great photos, offer tons of options, cost almost nothing to operate, are a lot cheaper, and much more reliable than they were a few years ago.  Because of all of these reasons and because most digital cameras can also double as back-up audio and video recorders, digital cameras usually form the backbone of any ghost hunting team.

You can take a lot of pictures without wasting film. You do not have to print any pictures unless they show some interesting phenomena or happen to catch a fellow team member in an embarrassing position.

Today you can do your analysis on a computer very easily, because there is a fast array of high quality photo analysis software.  You can zoom in and out, focus, crop, and even analyze beyond the visible spectrum, but remember only to work on copies – not the original – and resist the urge to over-tweak the photo.  Simply put, don’t do so much to make the image easier to see that you end up actually adding to the photo, because this simply gives ammunition to skeptics.

Digital Camera’s vary widely in price, but today the biggest difference is the lens and the resolution.  Usually, resolution depends on more that just megapixels, because higher end cameras tend to actually have hardware that does a better job of capturing various shades and colors in a variety of light conditions, but as a general rule – more megapixles equals better resolution.

Today no one should be out in the field with a camera that does not have at least 7.1 megapixels.  Remember, real 35mm film is about 20 megapixels, so even ten or twelve megapixels is not that close to 35mm quality, and the additional megapixels tend to make everything else on your camera, such as zoom and contrast, work better.

Today you can get dirt cheap digital cameras for under $50 or you can pay over $2,000 for a top quality camera and a high end lens.  The key is to find something that works for you in your price range, but if there is one piece of equipment to splurge on it is your digital camera, because it is the most useful and most flexible tool a modern ghost hunter has.

Night Vision Cameras- These are relatively pricey, but they enable you to take pictures without a flash and make it possible to see things you are unable to see in the dark.  They are the first piece of ghost hunting equipment that most people buy when they really get serious about the hobby.

35mm Cameras (film) – Despite all of the bells, whistles, and flexibility of modern digital cameras someone in your ghost hunting team should still carry a 35mm camera, because 35mm cameras capture images through a chemical process – not an electronic process – and some people believe that it is easier to capture spirits on 35mm film than digital cameras.

Also, today you can get some great, great deals on 35mm cameras that cost thousands of dollars a few years ago.  Check out ebay and you can probably find exactly what you need at a price you can afford.

Disposable Cameras – Great for a back-up to your digital camera, because these are 35mm one time use cameras. If you buy them in bulk you can get them for as cheap as $3.00.

Thermal Imaging Cameras– Thermal imaging cameras are VERY expensive. They detect and record temperature variation so you can see things may not be visible by the naked eye.  However, at $2-5,000 they are far more expensive that most people want to spend, however, many times the members of a ghost hunting club will all chip in to buy a thermal imaging camera.

Ghost hunting cameras come in almost every price range and all of them can be useful in the proper role.  If you really understand you equipments’ strengths and weaknesses you can deploy your gear in the way most likely to succeed in catching the images you are after.